Ahh, recycling. The incredible process of taking materials that would be thrown away, and making them into something new. While recycling has been practiced in one form or another for much longer than you might think, it has become even more important in the modern era, particularly when it comes to plastic. This is mainly due to the sheer levels of plastic production and usage, and how much these numbers have exploded over the years. Since the mass production of plastics started just six decades ago, the latest figures show that humans have produced more than 8.3 billion metric tons of it. And sending it all to landfills is clearly not an option. Enter: recycling.

While we all likely understand just how important it is to participate in recycling for the health of our planet, there’s another way that us humans are able to reduce the harm of our plastic usage: by actually choosing products made out of those recycled plastics. Yep, we have the choice to buy shiny new products made out of old plastics that were destined for the landfill.

Here’s another thing you might not realize about plastic: despite how much plastic is out there and its potential to impact the environment, the creation of plastic itself was actually pretty revolutionary. It marked the first time there was widespread access to a synthetic lightweight and sturdy material. Can you imagine trying to take your lunch to work in a container made out of heavy stone? No, we can’t either.

In general, when you choose to sip your water out of any Nalgene instead of a disposable plastic bottle, you’re saving about 167 of those disposable bottles from landfills a year. While that’s enough plastic to write home about, it gets even better. Some of our beloved bottles are actually made out of recycled plastics themselves, meaning that you’re giving a new life to former bottles which were going to end up in the trash. Now that’s a positive environmental impact to raise a Nalgene to.

A Brief History Of Plastic

While you probably can’t imagine a world without it, plastic hasn’t been around for all that long. And as we mentioned earlier, the invention of plastic actually brought about many positive benefits.

Plastics are made of synthetic polymers, which simply means a substance made up of many repeating units in a chain. There are many natural polymers that you’ve heard of, such as silk, wool, and even DNA. The first synthetic polymer was invented in 1869, as part of an effort to replace ivory usage. Billiards had become so popular that there was a strain on the supply chain of ivory, which was used for the billiard balls themselves, and there was a need for an alternative material. So when a New York firm put out an offer of $10,000 for someone to invent an ivory substitute, it led to the first synthetic polymer being created, by treating molecules derived from cotton fiber.

It wasn’t until a few decades later that the first fully synthetic plastic was created in 1907, and when it was invented, it was called “the material of a thousand uses.” At the time, the main resources available were natural ones such as wood, metal, stone, bone, tusk, and horn, and plastic was seen as a sturdy, lightweight, and inexpensive option with endless possibilities.

This kickstarted a plastic frenzy, and starting in the early 1900’s, companies started inventing different types of plastic by creating new polymers, mainly from plants, natural gas, and oil. Crucial materials were created that we still use today, such as nylon and plexiglass, and plastic was used in household items such as car parts, packaging, and furniture.

Plastic Production And Recycling As We Know It

The positive vigor surrounding plastics started to take a turn in the 1960s, when the amount of waste that was produced started to increase dramatically, and environmental efforts began in the United States. During and after World War II, plastic usage exploded, and after the war ended, spending was up. Along with that increased spending, there was unprecedented access to inexpensive plastic goods. And while this was cause for celebration at first, things quickly took a concerning turn.

Plastic debris was first spotted in the ocean in the 1960s, and knowledge about environmental problems started to spread. So much waste was being produced that Americans were becoming inundated by trash. As more and more waste was produced, curbside recycling began as a way to reduce landfill use.

This wasn’t the first time recycling was present in North America. In fact, we know that recycling systems were used in the colonial era, when new material was scarce. Even into the early 1900’s, materials were used over and over again, and items were rarely thrown away. Rags were turned to paper, leftover beef bones from dinner were used as fertilizer, and dresses were taken to the tailor to be altered into the style of the season.

By the 1980s, plastic had a pretty bad rap, and it was actually the plastic industry itself that started pushing municipalities to collect recyclable materials, leading to the recycling system as we know it today.

How Is Recycled Plastic Made?

Recycling itself has been a game-changer, but what actually happens after you set your plastics on the curb for recycling, or after you take them to a recycling facility? After plastics are collected and brought to a waste site, they are then sorted based on the type of plastic they are by a machine. You may have noticed the little numbers on the bottom of all of your plastic items. These numbers correspond to the type of plastic, and determine if and how it can be recycled.

After it’s brought to the waste site, plastics are typically washed, in order to rid them of impurities such as food residue, adhesive, and dirt. Then they’re shredded, and eventually melted and crushed to form pellets, which can then be reused and turned into brand new products.

What Is The Impact Of Using Recycled Plastics?

As a whole, the use of recycled plastics to create new plastic products gives old plastic a new life, and has incredible potential for widespread positive impact. When recycled plastics are used, it’s possible to reduce energy usage by 66%. Plus, every ton of plastic that’s recycled saves 16.3 barrels of oil, 98 million BTU’s of energy, and 30 cubic yards of landfill space.

Recycled plastics have plenty of uses, and can be found in car parts, furniture, clothes, and of course, water bottles. That’s why we launched our Sustain line, which is made with material derived from 50% plastic waste. Each Nalgene Sustain bottle is created from resin powered by next generation recycling technology that transforms plastic destined for landfills into high-performing bottles.

And while we hope you never part ways with your Nalgene bottle, once you’re done with it, there’s good news: Nalgene bottles are made from #7 plastics, which are now accepted in many residential and commercial recycling programs.

The State Of Recycling

While recycling is a transformative technology, it’s safe to say there is still more work to be done in order to lighten the load on the planet. The latest numbers from the EPA show that as much as 91% of plastics are not recycled in the United States, and are instead thrown in the trash. But when it comes to disposable bottles, the figures are more encouraging, with about 29% of plastic bottles and jars making it to a recycling plant.

There are many challenges of plastic recycling that might contribute to these numbers. For example, many plastic items that are thrown into the recycling pile can’t actually be recycled. While plastic straws technically could be recycled based on their makeup, they are typically rejected from standard recycling plants, because they’re too small for the machinery, and would just fall through the sorting systems.

The many challenges that come with plastic, recycling, and our impact on the planet make it even more impactful when you choose to recycle, and when you choose products that are made of recycled materials such as plastic. Bet you didn’t know that a seemingly small choice, such as choosing a Nalgene bottle made with material derived from  50% plastic waste, could make such a big difference.

Despite the challenges that plastics can pose, the creation of plastic was revolutionary, and has led to many advancements. The fact that you’re able to keep a lightweight and sturdy plastic Nalgene in your backpack while you’re on the trail is all thanks to the invention of plastics.

While we are already proud of the amount of disposable bottles that are saved when you choose a Nalgene, we’re especially pleased to be able to offer your products such as our Sustain line, which saves even more plastic from the landfill. So go on, quench your thirst with a Nalgene. The planet thanks you.

Made from recycled materials in the USA, an even more sustainable choice 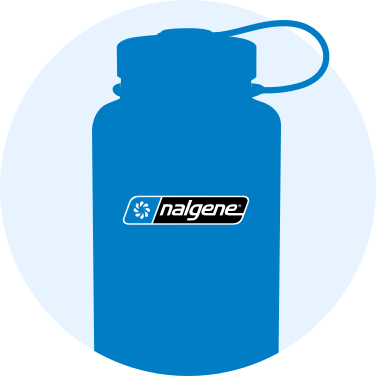